The village of Messing lies amongst picturesque countryside just 20 minutes from Colchester and 1 mile from Tiptree. It is a small and charming village steeped in history, with a population of around 300 people and a few local amenities such as a pub, post office and church. It shares its parish with the tiny village of Inworth, which has a population of around 100 people and is home to several small businesses. The village of Messing was named as Essex’s Best Kept Village in 2007 and 2008, and was the birthplace of Reynold Bush, ancestor to former Presidents of the USA, George H.W. Bush and George W. Bush. 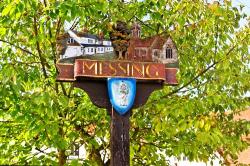 The village church, named All Saint’s Church, boasts character and tradition and, apart from its brick clock tower, was built entirely of rubble that was taken from a nearby Roman villa. Dating back to the 14th century, the whole church was refurbished in 1840 and, in the process, was fitted with new features that still remain today, such as a paved chancel of black and white marble and a beautiful stained glass window that represents the Acts of Mercy: St Matthew 25:35, 36, and in the top part – Faith, Hope and Charity. It is believed that this window may have originally been at New Hall School in Chelmsford, until it was carefully removed in 1648 during the siege of Colchester in the English Civil War. It was then hidden in the church’s great chest, together with other treasures, in order it preserve it from destruction. 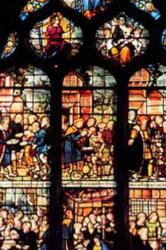 Even though Messing is nestled deep within the Essex countryside, the small village has excellent links to London from the neighbouring town of Kelvedon, which is home to the nearest railway station. From here, the journey by train to London Liverpool Street takes 45 minutes. By car, the city of Chelmsford is located just 15 miles from the village, and Colchester, Britain’s oldest recorded town is 8.5 miles away. Stansted airport is a 40 minute drive away, with other London airports such as Heathrow, Gatwick and Southend each accessible by car in under 90 minutes. 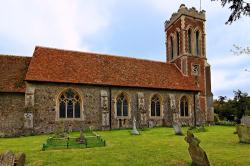 Messing is situated just 1 mile from the famous village of Tiptree, which has been a regular contender for officially being named ‘the largest village in England’. The village is known worldwide for its jam, marmalades and preserves, sold by the company Wilkin & Sons. The Wilkin family came to Tiptree to start farming in the early 1700s and established the renowned company in 1885.

Supposedly a derivative from the Saxons, the name ‘Messing’ translates to ‘the field of trampling’, which is said to relate to a battle between the Romans and Queen Boudicca on a nearby site called The Rampart.  The village itself holds a traditional fair every year on the first Tuesday in July, which features toy and cake stalls and crafts and activities.